As much as I want to deny it, fall is here in the prairies. The harvest is nearly in and there are just a few fields left with combines going day and night. Last night, I threw an extra quilt on everyone's bed and closed the windows for probably the first time since July. As nice as it is to crawl into a warm bed on a cool night, I'm already feeling that mix of melancholy and appreciation that autumn brings.
I love the colours and the crispness in the air, the urgency of the wind beckoning us to stay outside for as long as we can for the time is coming when the only fresh air we breath is running from building to building in an effort to escape frozen skin.

My son played in his first football game last night. I felt I had overdressed with a light coat and a sweater, with a blanket for my lap. I was thankful that I had because by half time, I was shivering and many around me were huddled together against the wind for warmth. The grass is changing from the lush green of summer to its crunchier cousin and even the bees buzzing around are getting sluggish.

For a long time now, I've had this reoccurring thought. "You can't chase autumn." It's a strange little saying that runs through my mind, particularly in September, as I drive across the bridge to work with the river letting off mist below me. There are specific beauties to be found in autumn that can't be replicated. The crunch of dry leaves. The colours of the trees reflected on the water. The slow buzz of bees winding down their last days of collecting before winter. The scratch of dried stems on plants beginning their slow descent into their own roots. The silences on playgrounds in the evenings and in the streets after the early onset of dark.

You can chase summer and heat any time of the year. You can replicate it by heading to the other hemisphere or even just south, where the light lasts longer and the days are still warm. There are climates that feel like summer even when we're in the depths of the deep freeze. The same is true of winter. When I was 18, I began a few years of working on the snow. Ski resorts were my winter home and many of my coworkers and friends followed the snow from the northern hemisphere to the southern, for year round work and recreation.  You can pick up in the heat of August here in Canada and jet away to Argentina or Australia for a week on the snow. Somehow the extremes of life can be replicated but the subtle nuances of a season like autumn can not. Even spring like conditions occur in areas like southern California, where seemingly everyday in a town like San Diego, you can choose to wear shorts and a sweatshirt or jeans and a t-shirt in relative comfort. But autumn, in all its beauty, is fleeting.

Interesting that autumn, with its warm days and cool crisp nights, is a transitional season. It's packing up the boat and pulling in the dock and trading out flip flops for wool socks and sweaters. Most people love autumn but hate change. I can be included in that, for the most part. It's hard to see the beauty of the change or transition when you're in it. And perhaps, the beauty, even when apparent, is so fleeting that it is hard to appreciate it without the accompanying pain. I think of the days when we left the US for Canada. We were so involved in the pain and separation of leaving that we couldn't see the beauty around us in it. And there was much beauty. People showing up on our doorstep with meals and gift cards in those final few weeks were absolutely the beauty of the transition. The dearest friendships, about to be stretched by time and distance, were also incredibly beautiful but those final weeks, the autumn of our time there, it was hard to see that through the tears.

Years ago, I watched a friend go through the final stages of a long and intense battle with cancer. When I look at photos of her in those last months, she was absolutely radiant and beautiful. I look at her smile and the fact that every photo has one of her children or her husband by the hand or in her embrace, and I see the beauty of the autumn of her life here. Yet, in those last weeks and months, I know, too, that there was so much sadness and acute heartache, that it seems that laughter should have been impossible, but there it is, evidenced in nearly every photo, even those when she was lying in bed, with little strength left.

Today, I walked out of the office to deliver some invitations and as I came back, I walked around the park on the way back into the building. The trees on the path in front of me are starting to change colour and the wind loosened a few leaves to float down around me. I know that I don't live "in the moment" enough, but I was reminded this morning, with the leaves fluttering down around me, that I can't be in the moment unless I stop looking forward and backward. I was dreading the rainy, cold months ahead and mourning the heat and relaxation of the months disappearing behind me and missing the beauty of the golden shower around me. I sat on a bench, for all of two minutes, and just took some deep breaths before heading back in to work. I listened as the wind rustled the leaves and they hit the path with a simple tap. The river was quiet. The park was not yet filled with the regular crowd of office workers on lunch break or joggers or yoga classes. I had two moments in which I experienced autumn. If it all goes past me from here on out, it may not be enough to last me until February or March when the hope of warmth is again on the horizon. So, I guess for the next few days, and as long as the transition continues, I'm going to be doing the impossible, embracing the transition and capturing as much autumn as I possible can.

Posted by Shelly VanB at 1:18 PM No comments: 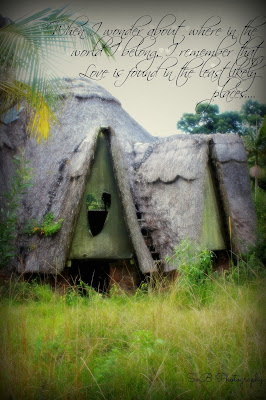 Posted by Shelly VanB at 7:43 PM No comments:

Praying for the Hope

This morning, my friend, George, tweeted out a photo that will change the way I pray for the Democratic Republic of Congo. He sent a photo of himself with those that are caring for the most vulnerable in communities around the DRC. I recognize my friend, Eric, whom I have worked alongside a few years ago when in northern Zambia.  Eric has always been very easy to pray for because I consider him a friend, I admire him greatly, and I know the struggles he faces and the things he has sacrificed to do the work that he does.

It's easier to pray for someone when you can picture his or her face, and know their stories. So, I'm sharing this photo with you. Even if you're not the praying sort, please just take a few minutes. Look at the faces of these care workers. These are the women and men that are living with very little themselves, but sacrificing much and giving more than imaginable to those that have less. The DRC continues in a war that finds orphans and grandmothers running from rebels and violence, often daily for stretches of time that we can hardly imagine. The country continues to be unable, or even willing,  to tend to the basic needs of its most vulnerable. Old and young alike struggle, even in times of relative stability, to feed themselves, find shelter, achieve safety...never mind dealing with the appalling traumas that they have experienced and witnessed.

So, here are the faces of those who care. Those who stand in the midst of the hurting and say, "We are together". Those who mother the motherless and advocate for the fatherless. Those who feed children and grandmothers who can't sustain themselves when they have no land, no currency, no stability. They do more than what any human could expect and they do it because they are filled with love.

These are the faces of the hope of the Democratic Republic of Congo. To me, they are beautiful and look like what I believe Jesus looks like, love in human form, in the darkest and most desperate of places.

You will never be completely at home again, because part of your heart always will be elsewhere. That is the price you pay for the richness of loving and knowing people in more than one place.

- Miriam Adeney
Posted by Shelly VanB at 2:04 PM No comments: