A Light in the Dark

Early this morning, well, more the middle of the night really, I was awake to see my phone light up across the room. It only lasted a second and normally I wouldn't leave the bed to check it, but I did. I had a message from my friend, Ashley, who is serving with Hands at Work in Zambia right now. She was letting me know that our dear friend, Nkosi, had passed away in Mulenga.

If you've been following the blog or in my vicinity since my first trip to Mulenga, you'll know how deeply impacted I've been by this man. A Malawian who somehow wound up in Mulenga, Zambia, Nkosi was an older man when I first met him. He wasn't exactly sure of his age but he wasn't young. He was going blind and walked with a stick or on the arm of one of the other care workers. He lived, at the time, in one small room, with only a chair, that he slept upright in,  and a few meagre belongings, but you would think he was the world's wealthiest man from his joy and contentment.  The first time I met him, I realized he was very special if only from the way that others responded to him. He was well loved in his community and had a smile and something encouraging to say to everyone. He took time with everyone and asked real questions to get to know you.

A year later, on a return trip, I spent more time with Nkosi in Mulenga. His sight was deteriorating until he could only see shapes and shadows, yet the moment I said hello, he knew it was me and we just picked up where we had left off. He still sang and clapped and danced as the care workers worshipped before going off on home visits. Nkosi too, at that time, still walked the crooked, uneven paths of Mulenga to visit children and make sure they were safe and care for in their homes. I think this trip, I recognized the amazing gift of Nkosi to this community and made time to be around him. He's one of those people that you see joy radiating out of and you want to just catch a bit of that light for your own.

A few years later, I returned with my boys and with Jason. Introducing the boys to Nkosi was such a beautiful moment for me. He immediately began to call them "his boys" and inquired after them whenever we would come into the community in the time that we stayed there. He loved Easton's name and knew Aidan's voice by heart. Nothing made my heart happier than seeing Easton, just 10, leading Nkosi up the path on his arm, chatting all the while, with no regard to language barriers.  Nkosi treated them as "his kids" just as he did all the kids at the care point. He now got around mostly with the help of some of the boys who grew up under his care over the years, at the care point.  He didn't often go on home visits anymore but would sit at the care point while the children came to eat and he would be surrounded by the older boys who would hang on his words and laugh at his jokes and generally just soaked up being around him. His eyes were sightless now and yet, he knew each child by the sound of their voice, recognized their laughter and could stop a squabble with a tap of his stick on the ground in the general direction of any conflict.  He sat with his legs crossed, his arms folded and listened intently, observing all that went on around him with the senses he had left at his disposal. He still spoke such encouragement, particularly to the boys who were growing up around him and to the other care workers.  Many times, I spent sat on the floor of the care point with several care workers and Nkosi, after the children returned to school, and he would take some of the littlest ones by the hand and play with them or he would sing and smile at whoever happened to be in the vicinity to receive his love.

In between that month + in Mulenga and my visit last year, Nkosi had suffered a stroke. Not faring well on his own, Elizabeth, another of the care workers, took him into her home, made him a bed and cared for him as her own brother.  There were fears at first that he was not going to recover, but recover he did and even though physically he was weaker and in pain, his inner strength and faith and joy grew even stronger. On good days, he would visit with the kids and be available to talk and pray. On bad days, he would pray from his bed and encourage whoever came to visit him. His mind was foggy but his faith was crystal clear and he spoke with the urgency of a man who recognized that his life was to be spent sharing what he had learned about the God he loved.

I last saw Nkosi nearly a year ago. When our team arrived in Mulenga, we were greeted and set to work, and I went straight away to see my old friend.  He was having a pretty good day, though he repeated himself often, but upon reflection perhaps that was something greater than himself. For the words he repeated were ones of love for us and for our family and for our work in Mulenga. He apologized for not showing us his love by coming to visit us when we came to visit him so often. We knew his heart was to remind us that though he had no conventional way of showing us his love, he was going to make sure we heard it straight from his lips. He continued to pour encouragement on Aidan and Kim and I as we sat near him at his bedside. I held his hand and we had a short but good visit, one I knew in my heart would be my last with him. When we left, I hugged him goodbye and I thanked him for all the lessons he had taught me. His goodbye to me was to tell me to greet "his Jason and his Easton" for him and to thank me for bringing "his Aidan"...those things further cementing his place in my heart for loving my family.

Knowing that he's gone leaves a giant hole right now, but it is also an incredible reminder that I need to believe what I say I believe - that a blind man can now see. That the weak are made strong. That there are no more tears, no pain, no suffering. How can I not celebrate the passing of Nkosi from the difficult and impoverished life he lived to the rich and rewarding one he deserves. I'm just mindful that celebration can involve tears and today, I just miss the guy. 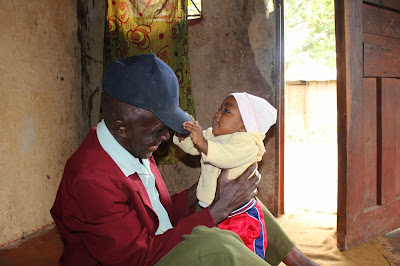 Shelly what a beautiful tribute to Nkosi.

Thanks Shelly. You speak for many of us. Wedzerai